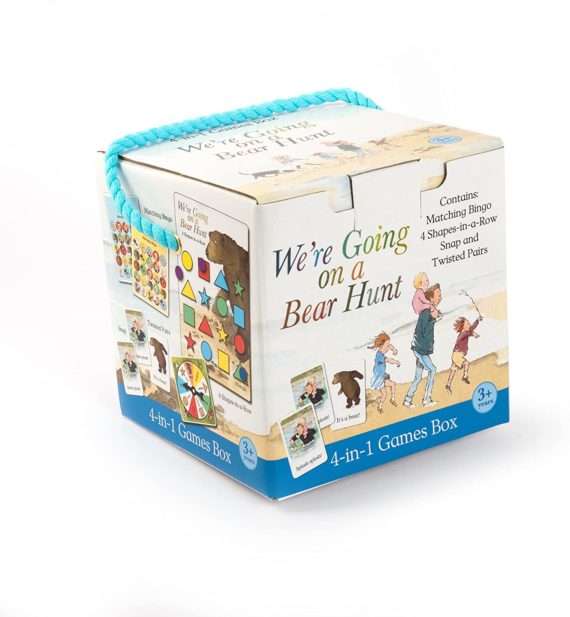 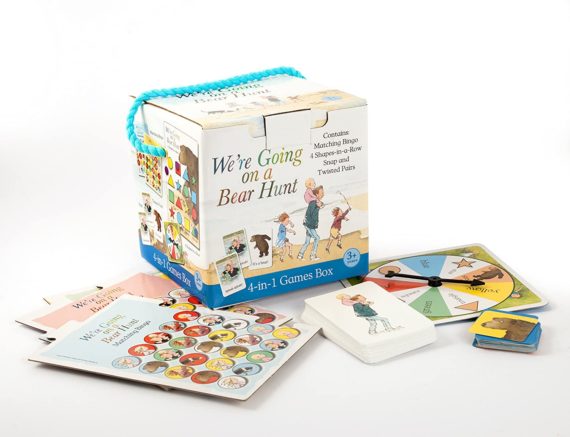 Fans of the We’re Going on a Bear Hunt will love the 4 in 1 Games Cube that is jam packed with four traditional games!

Bingo, Snap, Twisted Pairs and Four Shapes in a Row provide plenty of fun and challenges for up to two to four players

The educational games help with shape and colour recognition as well as encouraging youngsters with their game playing!

We’re Going on a Bear Hunt 4 in 1 Games Cube is just a little box of delights! Based on the famous children’s book We’re Going on a Bear Hunt, this little box is jam packed with four traditional games to keep youngsters entertained for hours! Matching Bingo, Snap, Twisted Pairs and Four Shapes in a Row provide plenty of fun and challenges for two to four players. Bear Hunt Matching Bingo is great fun and easy to play!

Each card has five lines containing five images of the characters from the Going On A Bear Hunt book. A pile of shuffled picture cards is placed face down and as each one is turned over, if the players can match that image on their card they cover it up with a little token. The first player to cover a whole line is the winner! Bear Hunt Snap and Twisted Pairs are based on the traditional games to help encourage youngsters with their game playing, taking turns and of course the ability to both win and lose!

Four shapes in a Row is a fantastic game to help little ones recognise and learn their shapes and colours. Each player takes a board that contains four rows of four randomly coloured shapes. Taking it in turns to spin the spinner which, may land on a colour or a shape, it is a race to be the first to cover up a row using the little tokens! Measuring 135mm cubed the We’re Going on a Bear Hunt 4 in 1 Games Cube contains colourful and educational games that are just perfect for children aged 3 and upwards to help encourage and stimulate their little minds.